Laís D’Isep, our seeds production analyst, visited settlements in several cities in the Araguaia region. While in Marianopolis, she reached out ot the settlements Manchete and Piracema for the first time.

In Caseara, Laís spoke with people living in the settlements União e Onalício Barros, that had already heard of the project beforehand, and with secondary school students in the Colégio Estadual Trajano de Almeida.

With these visits, Laís aimed to present the Araguaia Seed Collection Collective, answer any questions about the project, and invite local community members to participate in the training sessions.

So far, we have managed to engage 130 members in this initiative. 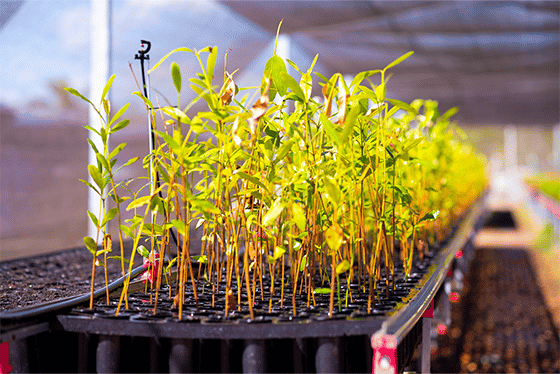 Training participants is a fundamental to our seed collection collective because it increases the likelihood that seeds will be collected in an appropriate way.

To this effect, the BJF technical team divided the course into five modules, including practices of seed collection and its benefits.

At the end of June, Laís went back to all the settlements she had visited previously to complete the first module of training in seed collection.

We expect this cycle of training sessions, including all five modules, to be concluded by the start of our next planting season!

LEARNING FROM THE EXPERTS

To organize the Araguaia Seed Collection Collective, we are learning from other already existing initiatives. In June, Laís D’Isep participated in a course offered by the Rede de Sementes do Cerrado, in partnership with Floresta Nacional de Brasília, Aprospera, Tikré and Caminhos da Semente.

The course provided an introduction to seed collection, outlined benefits of different fruits and seeds, went over seed storage, and explained how to organize and sell seeds.

At the Black Jaguar Foundation, we believe that we can inspire, learn, and ultimately, grow together. Strengthening communities and maintaining as well as restoring ecosystems in the region!

ABOUT THE ARAGUAIA SEED COLLECTION COLLECTIVE

The Araguaia Seed Collection Collective aims to provide our project with native seeds while simultaneously complementing the income of local communities living near the Araguaia River. Nevertheless, for seed collection to be realized in an appropriate way, the BJF team has been organizing numerous training sessions.

The following video shows trees that were planted one and a half years ago and are already producing seeds! The Urucum seed will be one of our priority seeds to be collected for the coming planting season.